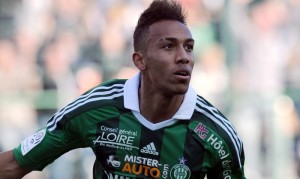 Chelsea have joined the chase for in-demand striker Pierre-Emerick Aubameyang, and could swoop for the St Etienne forward if they fail to bring in Radamel Falcao in the summer.
It is an open secret that Falcao remains Chelsea’s No. 1 target for the summer, even through the Atletico Madrid forward recently played down the chances of a move, by saying he was happy to remain with his current team.
“I have a contract with Atletico for three more years, therefore that’s the best option,” Falcao told El Mundo Deportivo.
“As a group we have the clear goal of qualifying for the Champions League. If we maintain the same level that we have showed we will achieve our objectives.
“We are not thinking about either (Real) Madrid or Barca, we are focusing on what we can give and on our objectives.”

Along with Chelsea, Manchester City, Paris Saint Germain and Real Madrid are also interested in making a move for the prolific Colombian.
Chelsea were reported to have agreed a move for Falcao in December, according to Punto Pelota, however nothing has been confirmed by either sides.
As the saga surrounding Falcao continues, the Blues are looking at potential alternatives, were Falcao to choose to remain with Atletico or sign for another team, with Aubameyang right up there on the team’s radar.
Fernando Torres’ future at Stamford Bridge is very much up in the air, after failing to fire this season. While Demba Ba is on the books of Chelsea at the moment, Aubameyang would be seen as another good addition, with the Gabon striker also interesting the likes of PSG, Monaco, Fiorentina and Newcastle, who reportedly failed in a January bid.
The 23-year-old, although not exactly prolific, has been in good form for St Etienne this season, and is expected to move to a bigger club sooner rather than later.