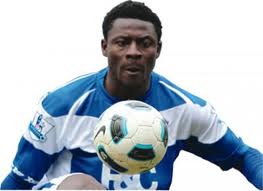 The 28–Year–old reveals he is expected to complete his deal over the weekend (Saturday), he has also scored 18 goals in 38 appearances with the Nigerian national team making a 13 – year career as a football pro.

“We are on the verge of finalizing everything, and it should be another step in my career,” Martins told BBC on Thursday. “I’m happy because Levante will benefit from this and it will also help the club financially.

“What the American club has offered is a good deal for everyone involved.”