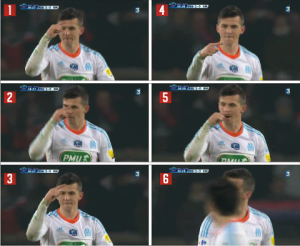 Joey Barton is no stranger to controversy and arguments and his latest spat was with Paris Saint-Germain striker Zlatan Ibrahimovic.

Barton and Ibrahimovic came up against each other for the second time this week in the French Cup clash between PSG and Marseille in Paris.
And while David Beckham made his first start for his new side, it was the other English midfielder who was intent on making the headlines.

Barton and Ibrahimovic clashed when the Sweden striker beat Barton to a header and the Marseille midfielder responded by telling Ibra he had a big nose.
The jibe did little to knock Ibrahimovich’s sizeable confidence as he scored both goals as PSG knocked Marseille out of the French cup.