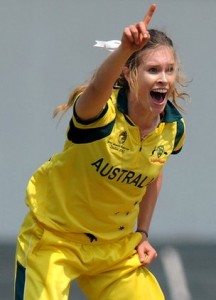 Cricket Australia, today advises that Ellyse Perry has been diagnosed with a stress fracture in her ankle.

“After consultation with a specialist orthopaedic surgeon Ellyse will not require surgical intervention but instead will enter a period of rehabilitation that should see her make a return to sport in around 10-12 weeks.”

The Commonwealth Bank Southern Stars’ next series will be the Ashes against England in August.