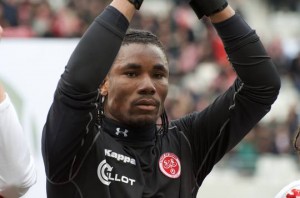 This may be a turning point for the end of the championship! PSG was beaten by Reims modest 17th the league 1 ranking.

The goal was scored by G.Krychowiak (64th)

Lyon can get a nice shot to play … The club plays tomorrow at 2:00 p.m. in Brest …. In case of victory, it  can return up against PSG – but still average distance to the goal … –

Paris has trouble with the little ones. It has already lost some illusions against Sochaux …

Still, the Togolese goalkeeper Kossi Agassa after an excellent Afcon with his country just experienced another great moment! Reims scored valuable points for it’s continued in LI and especially the tamed Parisian Stars. Him that morning had given in the Parisien: “They have more money than us. And like everyone else, I heard the price of the hotel room of Beckham. But it will be on a lawn, not in a nice hotel room. On land, we all have crampons …”