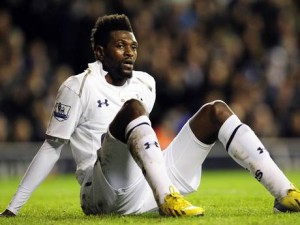 Bad news for the worldwide fans of the Togolese striker of Tottenham!!

Emmanuel Adebayor has not gone after the London derby between Tottenham and Arsenal. The Togolese striker got badly received in a duel in the air with two Gunners defenders and twisted his right knee falling (65th minute).

Remained on the ground for several minutes, the captain of the Hawks of Togo had to be stretchered out. He has also been replaced by Jermaine Defoe.

Having seen the shock on his knee, Adebayor might have for at least two weeks or more.