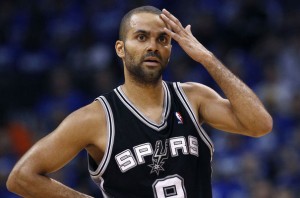 Parker underwent an MRI that confirmed the injury.

Parker, who closed out February averaging 26.1 points and 8.3 assists and shooting 54 percent from the field, was injured in the third quarter of Friday’s game against the Sacramento Kings as he drove down the lane for a scooping layup. As he twisted his body in midair to shield off Isaiah Thomas, who was defending on the play, Parker came down on his left ankle and rolled it outward.

He dropped to the ground grabbing the ankle while play continued at the other end of the court. He was eventually helped off the court, headed straight to the locker room and he did not return.

Spurs coach Gregg Popovich acknowledged after Friday’s game that Parker would be “out a while.”

Parker is the catalyst for the Spurs (46-14), who own the NBA’s best record, averaging team highs of 21 points per game and 7.8 assists.