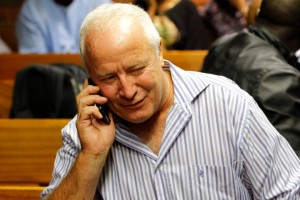 We knew since February 14 that not only Oscar Pistorius is a Paralympics’ champion but also a lover of guns.

We remind you that the champion is accused of killing his girlfriend with a 9 mm. On Monday, his father, Henke Pistorius explained his son’s attachment to firearms. According to him, the family has weapons to defend themselves because of the high crime rate in South Africa.

“There are guns for hunting and others to protect oneself that is handguns.  You cannot rely on the police, not because they are always ineffective, but because of the high crime rate in South Africa” said Henke Pistorius in an interview with the British newspaper the daily Telegraph.

Analyzing the origin of the high crime rate, Henke Pistorius openly accuses political power in South Africa. “It is the fault of the ANC government,” he said.

Oscar Pistorius is on bail since February 22. He agreed to pay the deposit estimated at 85,000 Euros.