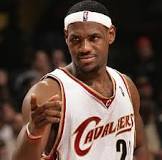 James Lebron is born on December 30, 1984 in Akron, Ohio. He showed an early talent for basketball and began to earn a reputation as a prodigy of the sport in high school. James was the first player picked (by the Cleveland Cavaliers) in the 2003 NBA draft.He has achieved a number of NBA records, including becoming the youngest player to score 20,000 points at age 28, in January 2013.

With his impressive record, it was no surprise that James was the first player picked in the 2003 NBA draft. The Cleveland Cavaliers signed the powerful young forward, and he proved to be a valuable addition to the then-struggling franchise. The team had ended the previous season in eighth place in the Eastern Conference. Around this time, James also signed several endorsement deals, including one with Nike for $90 million.

During the 2003-04 season, James made history, becoming the first member of the Cavalier franchise to win the NBA Rookie of the Year Award. He also became the youngest NBA player (at only 20 years old) to receive this honor. Additionally, James, averaging 20 points per game at this time, became one of only three rookies to accomplish this feat, putting him in the same company as Michael Jordan and Oscar Robinson.

James continued to excel professionally in the NBA the following season, upping his average points per game to 27.2. He made NBA history again in 2005, when he became the youngest player to score more than 50 points in one game. He was selected for the NBA All-Star game for the first time, a feat he would repeat several times over the next few seasons.

In 2006, James helped his team defeat the Washington Wizards in the first round of playoff action. From there, the Cavaliers took on the Detroit Pistons in the Eastern Conference semifinals. James scored an average of 26.6 per game in this postseason match-up, but it wasn’t enough to secure victory for his team. While his team wasn’t at the top of rankings, James himself continued to receive special recognition for his abilities. He was named the Most Valuable Player in the NBA All-Star Game in 2006. That same year, James reached a new contract agreement with the Cavaliers, which runs until 2010. 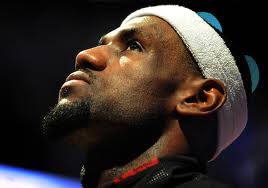 The Cavaliers proved to be stronger competitors the following season, making it all the way to the NBA finals, beating out Detroit to win the Eastern Conference. In the finals against the San Antonio Spurs, however, the Cavaliers lost their championship bid in four consecutive games. Also during this time, James became a father for the second time. His girlfriend, Savannah Brinson, gave birth to their son, Bryce Maximus, in June of 2007.

During the 2007-08 season, James continued to help the Cavaliers improve their standing in the Eastern Conference. The team made it to the semifinals, where they were defeated by the Boston Celtics in seven games. In terms of individual performance, James had a stellar year, outperforming such rival players as Kobe Bryant and Allen Iverson by scoring an average of 30 points per game, the highest average in the NBA regular season.

That summer, James traveled to Beijing, China to play with the likes of Bryant, Jason Kidd and Dwyane Wade on the U.S. Olympic Basketball Team. This time around the U.S. team brought home the gold after defeating Spain in the final round.

Early in the 2008-09 seasons, sports journalists and fans began talking about James’s future in the sport. He had the option to become a free agent in 2010, and there was much discussion as to where James may end up. Some journalists identified the New York Knicks as a potential suitor for the rising player. James made several references to his impending free agent status, but he was sure to downplay the matter.

“I am focused on the team that I am on right now and winning a championship … I don’t think about making a change at this point,” James told reporters.

In the 2011-12 season Lebron has known a successful time. And the Miami Heat, which ended the season with an NBA Championship win, beating the Oklahoma City Thunder (121-106) in Game 5 of the finals, on June 21, 2012. It was James’s first NBA championship win. In the final game, James scored 26 points, and had 11 rebounds and 13 assists. “I made a difficult decision to leave Cleveland but I understood what my future was about,” James told FOX Sports following the game. 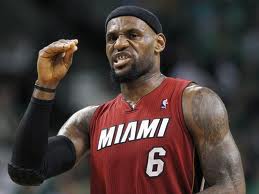 James competed at his third Olympic Games in 2012, at the Summer Olympics in London, along with teammates Kevin Durant, Carmelo Anthony and Kobe Bryant, as well as several other top players. The U.S. basketball team took the gold medal—James’s second consecutive Olympic gold.

During the 2012-13 season, James made NBA history yet again: On January 16, 2013, at age 28, he became the youngest NBA player to score 20,000 points, succeeding Kobe Bryant of the Lakers—who became the youngest player to reach 20,000 points at age 29—for the distinction. James made a jump shot the final seconds of the game, bringing his scoring total 20,001 and leading the Heat to a 92-75 victory over the Warriors. James is only the 38th player in NBA history to achieve this feat.

Throughout his NBA career, LeBron James has been considered one of the best players in the league, and has been compared to basketball great Michael Jordan.