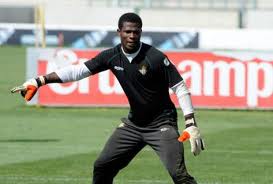 Ghana international goalkeeper Razak Brimah is eyeing a call-up to the national team, the Black Stars following his prolific display for CD Guadalajara in the Spanish Segunda Division.

Brimah is one of the few Ghanaian shot-stoppers who have made his mark at the world stage rising from the ranks in Europe from the youth stage to the Spanish Division One side.

The 25-year-old, has been without a club after leaving Tenerife in August 2012, joined Spanish second-tier side Club Deportivo Guadalajara till the end of the season.

The former Nania FC player believes he has what it takes to help Ghana in their quest to make it to the 2014 World Cup and other international assignments.

“I watched the [Black] Stars at the just ended Africa Cup of Nations and I should say I admire Fatau Dauda for his agility and quick reflexes and I believe I also have a great depth of expertise in the post and believe we can all make Ghana proud when given the opportunity,” Brimah told Goal.com Ghana.

Brimah is looking at emulating the likes of Idriss Carlos Kameni of Cameroon who made great impact in Spain with Espanyol and now with Malaga.