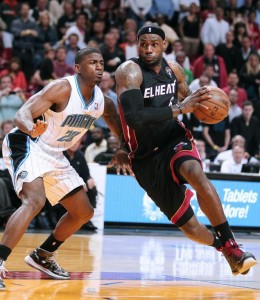 Solid leader of the Eastern Conference with 45 wins, the Heat maintains Orlando the penultimate place in the Conference.

James scored 26 points, including a go-ahead layup after getting past DeQuan Jones with 3.2 seconds left, and the Heat scrambled late to beat the Orlando Magic 97-96 on Wednesday night and extend their franchise-record winning streak to 16 games.

“I had no intention of shooting another jumper,” James said.

He missed a pair of 3-pointers about 90 seconds earlier, so he went for the 3-footer instead. From the right wing, James drove diagonally through the lane, then used his left hand after all, he is left-handed for the basket that won it for Miami. It was the first time he came up with what became a game-winning basket in the final five seconds of a game since a 3-pointer beat the Magic in the 2009 playoffs, according to STATS LLC.

“This is tough,” Magic coach Jacque Vaughn said, after his team fell to 0-2 against Miami this season the two losses by a total of three points. “You’ve got guys who battled, who really wanted to win this game and deserved to win this game.”

Dwyane Wade scored 24 points on 10-for-16 shooting he’s now shooting 62 percent in his last seven games and Chris Bosh added 17 points and 10 rebounds for the Heat, who blew a 20-point, second-half lead and then rallied from a five-point deficit in the final minutes.

Nik Vucevic had 25 points and 21 rebounds for the Magic, who got 16 points apiece from Jameer Nelson and Tobias Harris, 13 from Arron Afflalo and 12 from Maurice Harkless.

“They’re one of the best teams in the NBA, if not the best and we gave it our all,” Harris said. “They knew that. It’s just a matter of a couple of seconds that could have changed the game. It’s a tough loss for us but it’s the right step in the right direction.”

Vucevic now has two games of 20 rebounds or more in his career both this season, and both against Miami. He had a 20-point, 29-rebound effort in a loss to the Heat on Dec. 31.