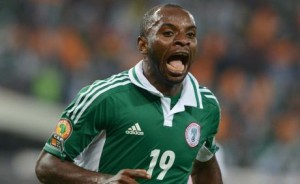 The controversy between Warri Wolves and Enugu Rangers is finally coming to a halt after both teams were under a rage of arguments about the 2013 star boy Sunday Mba who led Nigeria to victory.

Mba has however moved to voice his opinion over the long drawn battle between both teams who claim to own him. The footballer had revealed that he signed a contract with Enugu Rangers before the commencement of the 2013 Africa Cup of Nations in South Africa with Enugu Rangers.

“I signed a contract with Rangers even before I left for South Africa for the 2013 AFCON and I am surprised Wolves are saying Rangers have no right of ownership over me,” Mba told supersport.com on Wednesday.

Sunday Mba also continued to reveal that Warri Wolves was aware he had completed and signed a contract with Enugu Rangers.

“Wolves are aware of this and I am surprised they are saying I am still their player,” Mba said.

However, the Nigeria Football Federation (NFF) has set up a committee who will solve the controversy in a meeting at Abuja on Wednesday.