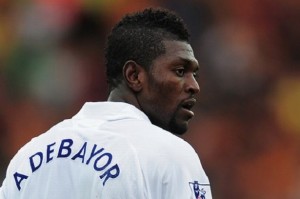 Convened by André Villas-Boas to face Inter Milan on Thursday (9:05 p.m.) in the fourth leg of the Europa League, Emmanuel Adebayor is still uncertain due to a knee injury Sunday against Arsenal (2-1).

The Togo international has not participated in training on Wednesday with his teammates.
The Togolese striker is thus announced in the next transfer window.

According to Caughtoffside, captain of the Hawks could leave England at the end of the season to discover Russia.

The former Arsenal player could join Samuel Eto’o. The Togolese striker strongly interested Anzhi Makhachkala.
Become “persona non grata” among Citizens, the African player of the year 2008 was revived in London at a loan before signed for three years. With 18 goals in 37 matches, the Hawk had convinced the leaders to keep.
Now Tottenham Hotspur dream terminate the Togolese striker down diet these days.