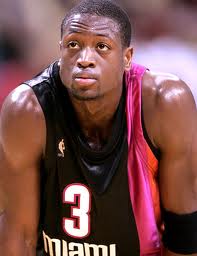 Born January 17, 1982), nicknamed Flash or D-Wade, Dwyane Tyrone Wade, Jr is an American professional basketball player who currently plays for the Miami Heat of the NBA. Named the 2006 Sportsman of the Year by Sports Illustrated, Wade has established himself as one of the most well-known and popular players in the league. He had the top selling jersey in the NBA for nearly two years, as he led the NBA in jersey sales from the 2005 NBA Playoffs, until the midpoint of the 2006–07 season. His first name is pronounced /dwɛɪn/, the same as the more common spellings “Duane” and “Dwayne”.

After entering the league as the fifth pick in the 2003 NBA Draft, Wade was named to the All-Rookie team and the All-Star team the following nine seasons. In his third season, Wade helped lead the Miami Heat to their first NBA championship in franchise history. He was named the 2006 NBA Finals MVP as he helped lead the Heat to a 4–2 series win over the Dallas Mavericks. At the 2008 Summer Olympics, Wade led the United States Men’s Basketball team, commonly known as the “Redeem Team”, in scoring, as they captured gold medal honors in Beijing, China. In the 2008–09 season, Wade led the league in scoring and earned his first NBA scoring title. He was part of Miami’s second championship win in the 2012 NBA Finals, when Miami defeated the Oklahoma City Thunder.

Dwyane Wade was born on the South Side of Chicago, Illinois to Dwyane, Sr. and Jolinda Wade. He cites one of his older sisters, Tragil, as the individual most responsible for his childhood upbringing and for steering him in the proper direction. His parents divorced and he lived with his father and stepmother in Robbins, Illinois during his childhood. As a child growing up in the Chicago area Wade idolized former Chicago Bulls star Michael Jordan and has said he patterns his game after him.

Wade attended Harold L. Richards High School in Oak Lawn, playing for the school’s varsity basketball team. While he did not acquire much playing time during his second year, his stepbrother, Demetris McDaniel, was the star of the team. Wade grew four inches in the summer before his junior year and saw an increase in playing time, averaging 20.7 points and 7.6 rebounds per game. The following year, Wade averaged 27.0 points and 11.0 rebounds per game while leading his team to a 24–5 record. It advanced to the title game of the Class AA Eisenhower Sectional. During this season he set school records for points (676) and steals (106) in a season. Wade was recruited by only three college basketball teams (Marquette University, Illinois State, and DePaul University) due to academic problems 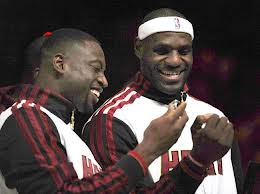 Due to his newfound fame and success, Wade decided to forgo his senior year and instead enter the 2003 NBA draft. He was selected by the Miami Heat, and was picked fifth overall. Wade’s first year with the Heat, he averaged 16.2 points, 4.5 assists and 4.0 rebounds per game, and was a unanimous selection to the 2004 NBA All-Rookie team. After Shaquille O’neal was traded to the Heat, Wade’s numbers increased further, with a new average of 24.1 points and 6.8 assists per game. In the 2006, Wade gave an impressive performance in the NBA finals against the Dallas Mavericks. In the third game of the finals, he scored 42 points and made 13 rebounds, helping the Heat defeat the Mavericks for a close 98-96 win. His 36 points, 10 rebounds and five assists in the sixth game earned him the honor of the NBA finals MVP.

After a series of operations to repair shoulder and knee injuries, Wade emerged for another strong season in 2008, arguably his best season ever with the Heat. Averaging 30.2 points per game, he earned his first NBA scoring title. In 2010, Wade became a free agent for the first time, but signed again with the Heat, joining new teammates Chris Bosh and LeBron James. The trio proved to be very strong during the 2010-11 season, and although the Miami Heat returned to the NBA finals again, the team lost in six games to the Dallas Mavericks.

In 2012, the Heat returned to the finals yet again, with a victory. They beat the Oklahoma City Thunder, 121-106, in the fifth game of the series—Wade’s second NBA Championship win, and the first for some of his teammates, including Chris Bosh and LeBron James.

Wade is a devout Christian and chose the number 3 because it represents the Holy Trinity. He tithes 10% of his salary to a church in Chicago. His mother, Jolinda, strengthened her ties with Christianity in 2001 after years of drug abuse and dealing. She served as a minister during her final prison sentence in 2002 and 2003. She was ordained as a Baptist minister in January 2007, and formed the non-denominational Temple of Praise Binding and Loosing Ministry in Chicago. In May 2008, Wade purchased a church building for his mother’s ministry