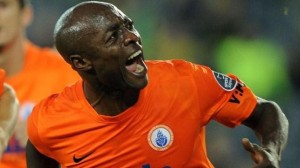 Samuel Eto’o and Anzhi Makachkala were forced to draw by Newcastle in the eighth-finals of the Europa League. A draw that does not benefit the Russians for the second leg of the competition. In contrast, the Cameroonian Pierre Webo and Nigerian Ogenyi Onazi were decisive for their respective clubs, Fernerbahçe and Lazio.

Alone in the attack Makachkala Anzhi, Cameroonian, Samuel Eto’o could not find the net of the Magpies. The entrance to the Ivorian Lassina Traore gave nothing.

The Franco-Algerian, Ben Arfa, the Franco-Malian Sissoko and a Franco-Central African Mapou Yanga-Mbiwa blocked the road to the Russians.

The beautiful harvest of the eighth final returns to Spurs Tottenham. Despite the absence of Togolese Emmanuel Adebayor Sheyi, to be put to rest too just for the game, Gareth Bale and his family have done the job 3-0. The Cameroonian Benoit Assou-Ekoto and Belgian origin Malian Moussa Dembele attended the party.

Milanese side, the Senegalese Ibrahima Mbaye followed the game from the sidelines.

Senegal defender Lamine Sane, on back injury, has not prevented the Portuguese to win (1-0). Entries Franco-Tunisian Khafallah Ben  and Malian  Traore Abdou failed to return to the Girondins score. Francis Gillot foals can still believe.

The Blues Chelsea were dominated by Steaua Bucharest 1-0. Nigerian John Obi Mikel, the recent AFCON champion, played the entire game. The former Lyn Oslo player is the only African encounter.

The international Cameroonian striker Pierre Achille Webo helped his club to take a nice option for the quarterfinals. The Indomitable Lion scored the only goal of the game in the 81st minute. A Turkish victory outside before the return leg.

Nigerian midfielder, Ogenyi Onazi scored the second goal of the Italians in the 56th minute. A realization that jeopardizes the chances of qualifying for the German club Ivorian, Arthur Boka and Guinean Ibrahima Traoré. These two players have played the entire game.