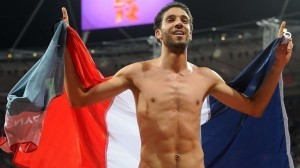 Mahiedine Mekhissi admitted being approached by Algeria to wear the tunic of his country of origin. The double Olympic silver medalist in the 3000m steeplechase was adamant about his answer.

“My goal is not to run for Algeria. Me, it’s the France team that makes me dream “suggested the athlete.

Mekhissi was contacted by the president of the Algerian Federation, Baddredine Belhjoudja. But France has not yet made a formal approach to enlist the recent champion of 1500 m indoors.