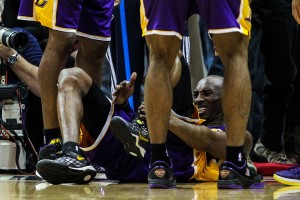 After crumpling to the court with a severely sprained left ankle that Kobe Bryant called his worst in the past 13 seasons, the Los Angeles Lakers’ star guard could miss key games in the stretch run to make the playoffs.
In the final moments of the Lakers’ 96-92 loss to the Atlanta Hawks on Wednesday night, Bryant missed a fadeaway baseline jumper and landed on the foot of Hawks defender Dahntay Jones.

After X-rays came back negative on his ankle, Bryant was livid with what he believed had been a “dirty and dangerous” play on the part of Jones.
In an email to Yahoo! Sports late Wednesday night, Bryant said: “Jones threw his hip and lower body into mine on the shot. That’s a foul with 100 percent certainty. Dirty and dangerous play. Doesn’t belong in the game.”

On his personal Twitter account, Jones tweeted, “…Tape doesn’t lie. Ankle was turned on the floor after the leg kick out that knocked him off balance. I would never try to hurt the man.”

Have a look here below :