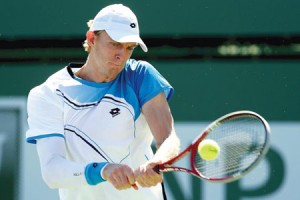 Kevin Anderson continues his adventure in the Indian Wells Masters 1000.

He has reached the quarter-finals of the BNP Paribas Open with a three-set victory over 13th seed Gilles Simon.

“I did the best I could do, with my 2 previous matches here (which were not good). I went far … At least this time, I felt that something was happening on the court. I didn’t put him in danger in the first set but I found a good rhythm in the second variant in my service returns, “says the head of that series No. 13, who after losing 6/3 won the second set 1/6. “After I make a bad play to start the third set.”

Simon is the second seed that Anderson has knocked out of the tournament in Indian Wells following the South African’s surprise victory over David Ferrer in the second round.

Anderson will face either Richard Gasquet or Tomas Berdych for a place in the semi-finals.