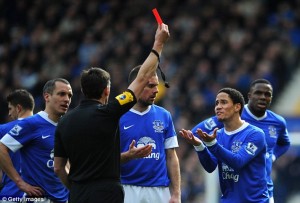 Difficult afternoon for Steven Pienaar. The South African midfielder of Everton was excluded during the Premier League match between his team and Manchester City. Pienaar took first a yellow card in the first period after a tackle (his team leading 1-0, Osman goal).

After the first half-time, the former Tottenham is the author of a nasty tackle on Javi Garcia. The referee Lee Probert waved a second yellow card. But Pienaar had to appreciate the fighting spirit of its partners, despite the numerical inferiority they played hard against Citizens. Jelavic scored a second goal in the 93rd minute of play to seal the victory of Tofees (2-0).