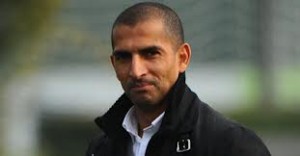 Sabri Lamouchi, born on November 9, 1971 in Lyon is a former French football midfielder of Tunisian descent.
From May 2012, he became the coach of Côte d’Ivoire national team, his first managerial position.
Career
Trained in Alés, he was one of the best midfielder of his generation. He was part of the great Auxerre, before playing in Monaco and later on in Italy. He then successfully converted as coach.

Coach :
– May 28, 2012 he was appointed to head the selection of Côte d’Ivoire replacing François Zahoui. His task is to qualify the selection for the 2014 World Cup in Brazil.
– November 2012: he qualifies the Ivory Coast for the 2013 Afcon.

National selection:
– 1994 he was selected in Tunisian national team, but he remains on the bench following the choice of  Khmais Laabidi, Tunisian national team’s coach at that time.
-1996  he played the Euro with the French football team
– 1998: he was one of six players left out of the “list of 28” of Aimé Jacquet shortly before the 1998 World Cup.