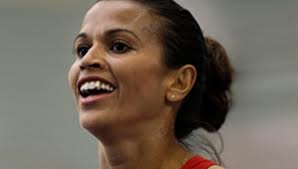 Habiba Ghribi was born on 9th April 1984 in Kairouan.
Her family emigrated to Sfax to allow the children to be educated in good conditions.

Personal life:
– She married Khaled Boudhraa, coach of Algerian origin.
– August 2012: she announced her divorce after the London Olympics.

Career:
Specialist of middle-distance and long-distance races. She is world-vice champion and Olympic silver medalist in 3000 m steeplechase. She also holds the record of Tunisia in the discipline. On August 6 2012, she won the London Olympic silver medal in 3000 m steeplechase, becoming the first Tunisian among  10, and the second athlete from Tunisia from both sexes to win an Olympic medal after Mohammed Gammoud

She is trained by the club Rades since 2003.