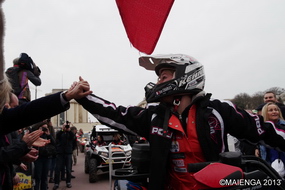 Africa Top Sports announced you. The atmosphere was festive on Saturday at the start of the Rallye Aicha des Gazelles.

We invite you to relive the highlights of the picture top start. It was attended by Carlos Gohsn the CEO of Renaut- Dacia who came to support his crew, Adriana Karembeu, the godmother of the 2013 edition, Chantal Jouanno, Senator and Danièle Evenou a fervent supporter of the rally since its inception.
Team 127 (christelle DELANGLE and Ludivine) which is at its first participation shows up relaxed:

“We do not know at all what to expect, actually. And for the moment, what we found most difficult, namely financing is behind us. We have the impression that the best is yet to come, which is perhaps completely to ignore the difficulties of the milieu. We shall see! ‘