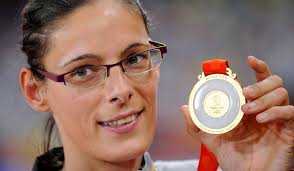 Born 16 February 1978 in Antwerp Tia Hellebaut is a Belgian track and field athlete, who started out in the heptathlon, but afterwards specialized in the high jump. She has cleared 2.05 metres both indoors and outdoors.
She holds the Belgian records for heptathlon, indoor pentathlon, indoor long jump and high jump, both indoors and outdoors.
Career
Hellebaut started as a professional athlete with Atletiek Vlaanderen in the period from 2001 to October 2005. From 1 November 2006 she again became a professional athlete, this time at Bloso. During her most successful period, Hellebaut was trained by her partner, Wim Vandeven, at her club, Atletica 84.
Her 2006 victory in high jump at the European Championships became especially notable, when just a couple of minutes later her close friend and compatriot Kim Gevaert completed a historical sprint double. The images of both athletes celebrating their victory together, wrapped in a national flag, became part of Belgian sports history.
In 2007 Hellebaut set the fourth best pentathlon score of all time, but chose not to contest the European Indoor Championships because of illness.
Retirement and comebacks
On 5 December 2008: Hellebaut announced her pregnancy and her retirement from professional athletics, and started working for a sports marketing company. The following year, on 9 June, her daughter Lotte was born.
On August 17 during a press conference, she confirmed that she had been pregnant for three months already, and that this had been a conscious choice
On 16 June 2011, 4 months after the birth of her second daughter Saartje, Hellebaut announced her second return, confirming that she aimed to defend her title at the London Games.
Palmares
1995: 9th in high jump with 1.75 m at the European Youth Olympic Festival in Bath (Uk)
1997: 11th in heptathlon with 5157 points at the European Junior Championships in Ljubijana (Slovenia)
1999: 6th in heptathlon with 5548 points at the European U23 Championships in Gothenburg (Sweden)
2001: 14th in heptathlon with 5680 pts at the World Championships in Edmonton (Canada)
2004: 5th in pentathlon with 4526 pts at the World Indoor Championships in Budapest (Hungary)
-12th in high jump with 1.85 m at the Olympic Games in Athens (Greece)