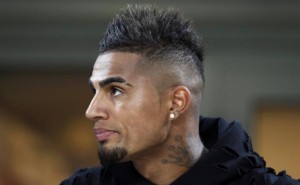 The midfielder of AC Milan Kevin-Prince Boateng has described racism as a “dangerous disease” that must be stamped out.

The Ghana international unintentionally hit the headlines in January when he initiated a walk-off in a winter break friendly against Pro Patria after suffering racist abuse from supporters in the stands.

“There have been moments in my life when I didn’t wish to face the problem. I tried to ignore it as if it was a headache that would sooner or later go away. I just had to wait,” he said in a UN address in Geneva.

“That, however, is an illusion. It won’t go away by itself. We have a duty to face racism and to fight it.

“The concept ‘a bit racist’ doesn’t exist. There are no tolerable quantities of racism. It’s unacceptable regardless of where it happens or the form that it takes.

“When I played for Ghana, I learned how to fight malaria. I think that racism and malaria have a lot in common.

“Stadia can be places where people of different colour come to support their teams or they can be seen as stagnant areas where healthy people will be infected by racism. We can’t allow this to happen before our very eyes.

“Football stadia, like other places, are full of young people. If we don’t fight the stagnation, many of those who are healthy today, could become infected with one of the most dangerous diseases of our time.

“It’s just as important to stand up to racism today as it was in the past. We have to find inspiration from those who have risked their lives for the cause.

“I’m convinced that it would be a fatal error to believe that we can fight racism by ignoring it and hoping that it’ll go away like a headache. This won’t happen.”

Boateng thanked his Milan team-mates for leaving the pitch with him against Pro Patria earlier in 2013.

“I decided to stop the game and kick the ball into the stands as I felt profoundly angry and offended by the racist insults directed at me from the stands,” he continued.

“That gesture alone would not have had any particular resonance. My team-mates, however, immediately followed me off the pitch without a moment’s hesitation.

“The fact that the entire team had taken such an equivocal step against racism made news headlines the world over. That’s why I’m here today. It’s an honour for me to have the chance to speak here today.”