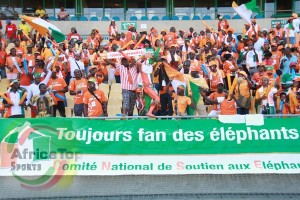 Even without its No. 1 star Didier Drogba, Ivory Coast turns up trumps. The victory of the Elephants (3-0) this weekend against Gambia in a match counting for the third day of the playoffs of 2014 FIFA World Cup is a perfect illustration. W.Bony  (penalty) in the 49th ;  59th , Y.Toure and S.Kalou were the authors of the three goals.

Ivorian fans who had vomited Drogba and his generation after the elimination of Ivory Coast in the quarter-finals of the 2013 Afcon, demanded Saturday at Felix-Houphouet-Boigny Stadium, the presence of the Galatasaray striker. In a video published by the Ivorian website abidjan.net, we could have heard the fans chanting “We want Drogba.”
Evidence that the former African golden ball winner dwells in the heart of his countrymen.