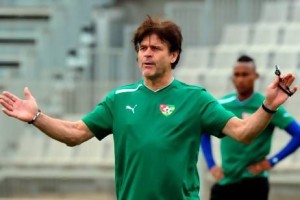 His media outlets are rare. Suddenly, his presence on the board Monday at TVT (Togolese national TV) was scrutinized closely. Didier Six, the coach of the Hawks of Togo has attempted to provide explanations of these choices in recent weeks. In vain.

Since the Afcon 2013, the cloth burnt between Six and his senior players including Emmanuel Adebayor and Kossi Agassa. At the time of making his list for Cameroon in FIFA World Cup 2014 (2-1), the French technician did not appeal to both men. An unacceptable situation for the federation which has turned upside down the list of the coach. If Six confirmed that he had not called Agassa and Adebayor, he also reveals that he had not agreed with the final list of the FTF “The final list did not have my blessing. I did not put Sheyi and Agassa. “And gave the reasons: “I had no insurance. Sheyi was out on a stretcher in a game and they talked about torn ligaments. I could not take risks. For Kossi, I read in France Football that he thought of stopping and give way to the young. “In the first case, Adebayor injured against Liverpool came back a week later and also scored in the Europa League against Inter Milan, several days before making his group. Short let’s overlook it.

Didier Six also seems to have lost hold of his workforce. Apart from Adebayor and Agassa absent inYaoundé, the staff had no news from the Ayité brothers. The technician was unable to find answers to these defections and is satisfied with what he has. Former Blue does not communicate either with his deputy, said the local Tchakala Tchanilé and always works with Alain Happe. A friend he brought in his luggage and who serves as an interlocutor in the staff since his appointment. Except that since the return of the African Cup, the latter resigned, probably tired by egos of his head coach. “Alain Happe remains my assistant in mind,” he said. Six specifically criticized Tchanilé for his remarks on the media on his inappropriate behavior in South Africa. “I have learned through the media that all Tchakala told when I was not there. He told me he never said that and his words were distorted and gives told lies. “ Under these conditions, no question of working with him, we can summarize.

Didier Six is also criticized for his tactical choices. We remember that after getting removed from Afcon, Adebayor and Agassa among others have criticized his choices. He has still not digested. In Yaoundé, while led (2-1), the technician removed Komlan Amewou and sent Moustapha Salifou back and pushed the defender Vincent Bossou to strike. And yet, is still remained a replacement for a striker on the bench (Kalen Damessi). His answer puzzled: “Yes I did send Vincent in front for his height so that the guys to send long balls forward. For Amewou and his replacement with Salifou, they are friends so substituting one for the other does not pose any problems. “

Didier Six knows. He is vomited by the Togolese press and the federation also seeks to get rid of him. Amavi Patatou, spokesman for the FTF did not hide it on the antennas of Radio Frequency 1 (local radio) last Saturday: “The problem with Six is there are several months contract. If will sack him today, we will have to pay huge benefits to him while we have no sub. Jean Thissen’s file is still pending at CAS. So we think. We know it can no longer handle the case. “

The French technician aware of his realities clings too.