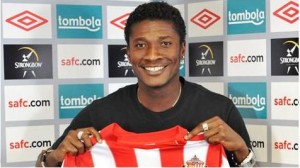 Asamoah Gyan was born on 22ndNovember, 1985 in Accra; nicknamed “Baby Jet” he is a Ghanaian International football player who plays as a striker for Stade Rennais in the French Ligue 1. He is the first Ghanaian Player ever to score a goal at the FIFA World Cup Finals and also missing a crucial penalty kick in the last minute of extra-time in Ghana’s quarter-final defeat by Uruguay.

He signed for Udinese in 2003 from Ghanaian club Liberty Professionals located in Accra, Gyan spent two years on loan at Serie B club Modena to gain match experience. Following some excellent displays during the 2006 World Cup, he attracted interest from Russian club Lokomotiv Moscow. Gyan returned to Udinese at the start of 2006, but on 17 February 2007, Udinese pulled out of a deal to sell him in the January transfer window. The striker was on the verge of signing a 3-year deal with Russian Club Lokomotiv Moscow for US$10.5m, the fourth largest transfer fee in Russian football history.

On 11 July 2008, Gyan was signed by French Ligue 1 Club Stade Rennais for 4 years on an €8 million transfer fee. Gyan played 48 times for Rennes, scoring 14 goals. By the end of his stay at Rennes, he became a well known goal scoring figure, scoring 13 league goals in the 2009–10 seasons. However, Gyan only played three games in Ligue 1 the following season, taking his total appearances to 53, before he departed for Sunderland. 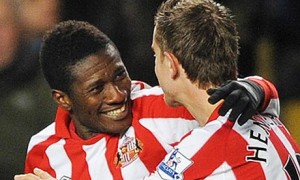 On 10 September 2011, it was confirmed on the Sunderland website that Gyan would leave on a season long loan to club Al Ain FC. Amid speculation of a fee of up to £6 million being paid for the loan period, with Gyan receiving up to four times his previous salary, Chairman Niall Quinn emphasised the financial benefits of the deal for both Sunderland and the player. Gyan also stated that he left Sunderland for money, saying that the offer he received was “too good to refuse”. The Ghanaian finished the season with Al Ain by helping them capture their tenth league success and was the top goalscorer in the season with 22 league goals.

Gyan made his international debut at the age of 17. Gyan scored on his senior International debut for Ghana against Somalia on 19 November 2003 in the 90th minute, he came on for Isaac Boakye in the 62nd minute in a 2006 FIFA World Cup qualifier, three days before he turned 18 years; helping Ghana to win that game, and making him the youngest ever player to score for Ghana. He scored four times in seven matches during that successful World Cup qualifying campaign. He was part of the 2004 Ghana Olympic squad, who exited in the first round, having finished in third place in Group B. 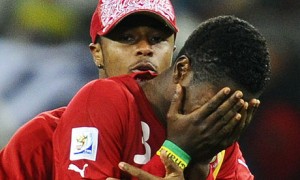 He also scored the fastest goal of the 2006 World Cup after 68 seconds. The strike was also Ghana’s first ever goal in the World Cup, coming in the game against the Czech Republic on 17 June at the RheinEnergieStadion in Cologne, Germany, which set the Black Stars on their way to a 2–0 victory. He missed a penalty later in the game, and received a yellow card ruling him out of the final group game for trying to take the penalty too early. In Ghana’s defeat to Brazil in the Round of 16, he was sent off in the 81st minute after collecting his second booking of the match (for diving).