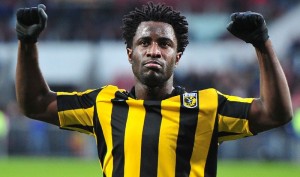 Certainly this is the season of the Ivorian international, Wilfried Bony who has struck again in the championship of the Netherlands.

The former player of Issia Wazi scored his 27th goal of the season this weekend during the 2-1 win of Vitesse Arnhem against PEC Zwolle.

A victory that propels Vitesse to the 3rd place in the ranking to be on par with PSV Eindoven and with only 3 points from Ajax leader.

The player’s performance is noticed and will undoubtedly rewarded.

The list of the clubs which which fancy the native of Bergville grows with Chelsea and Monaco who have showed up.

With 27 goals, Bony struggle with Messi and Ronaldo for the European top scorer of the season.