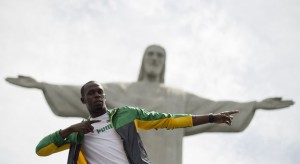 Usain Bolt obtruded on Sunday with a time of 14 seconds 42 on a distance of 150 meters installed on Copacabana beach in Rio de Janeiro. This is the first major race of the athlete season. The Jamaican star missed his record set in May 2009 under the drizzle of Manchester.

Bolt began well, leaving suddenly his opponents and halfway, he creates an important gap. He did a show slacking off a few steps in front of thousands of sunbathers who attended this event called Mano Mano.