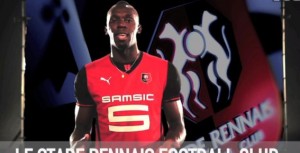 The Jamaican athlete Usain Bolt fan of the English Premier League and Manchester United specifically appeared Saturday in a video broadcast of Rennes before the match against PSG (0-2 defeat).

Usain Bolt, six-time gold medalist at the Olympic Games with the Breton club jersey on his shoulders sent an encouraging message to the players of Antonetti Frédéric who competed against Saint Etienne on April 20 in the final of the League Cup.

“The Flash” ended his message with the Breton word “kenavo” which means goodbye. Note that the athlete and Rennes have in common the supplier of Puma.This might explain this media outlet of the Jamaican star alongside the club which occupies the tenth place in League 1.
[youtube]http://www.youtube.com/watch?v=QizLTEKUXwc[/youtube]