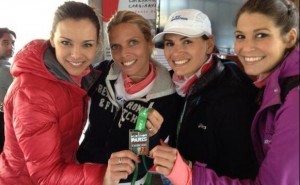 The Kenyan, Peter Some has been very easily imperative. Among the women, the Ethiopian woman Tadese Boru broke the record for the event.

But we also retain the feat of four former Miss France who ran the marathon in relay to raise money for Sponsorship for the Cardiac Surgery.

“We did it! In relay but it is a good start! The four medals next year! “