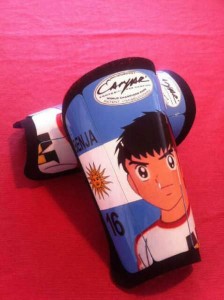 Monday, the Argentine striker got a prestigious victory for Manchester City in the derby against United.

Removed from the bench, Sergio Aguero scored the winning goal after a solo rush in the defense of the Red Devils.

After the meeting, “Kun” revealed his secret on Twitter by posting a photo of his shin guards. It shows the image of the hero, Olivier Atton, of the manga series Olive and Tom.