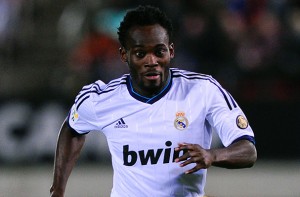 Michael Essien is injured again. The Ghanaian appointed to a permanent post at the right of Real Madrid defense on Tuesday in the Champions League against Galatasaray lasted only 30 minutes, while his team was leading the match, 1-0 (goal by Cristiano Ronaldo).

After a race in the Turkish camp, the former Blue holds the lower thigh and asked the Merengues bench to go out. He was replaced by Alvaro Arbeloa. We do not yet know the severity of the injury or the downtime of Essien.

Essien should return to Chelsea at the end of the season. He is only on loan by the English club.