The five major championships are moving towards the end. But this weekend, Africans have once again pointed the tip of their nose. Special mention for the Beninese, Stephane Sessegnon, author of an excellent game in the derby against Newcastle.

There was also the Cup but the Premier league menu this weekend. For the teams involved in the semis of the Cup, Wigan of the Ivorian Aruna Koné has qualified for the final by beating Millwall 2-0. Qualification also of two other elephants (Kolo and Yaya Toure) who disposed of Chelsea 2-1. Senegal’s Demba Ba has spread his class on this meeting with a beautiful goal.

Sunderland can say thank you to Stephane Sessegnon. The Beninese delivered all in the derby against Newcastle. First scorer at the 20th minute, he also issued an assist to Vaughan late in the game to close the festival with 3-0 for Black Cats against the Magpies.

Everton pressed a little more Queen Park Rangers. The Tofees have left no chance to the club of Stéphane Mbia beaten 2-0. The Nigerian, Victor Anichebe is shown by scoring the second goal for his team.

Festival of goals in the Andalusian derby between Real Betis and Sevilla (3-3). The Nigerian defender Nosa Igiebor scored the third goal of Betis. 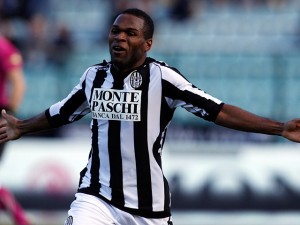 Innocent Emeghara (in image at right) once again sent Sienna out of a bad patch. Moving towards a 2-2 draw with the bottom club Pescara, the Nigerian striker scored a third goal for Siena at 4 minutes from the end to remove the 3 points of the day. It is the seventh goal of the season for Emeghara.

Bordeaux finally wins in League 1 and can say thank you to its Africans. Opposed to Montpellier (4-2), the Girondins are delivered a first time by the Senegalese, Lamine Sane before the Malian Cheikh Diabate registers the 800th goal of the season in the championship of France. In the second period, the Franco-Malian Saivet Henry added a fourth goal. 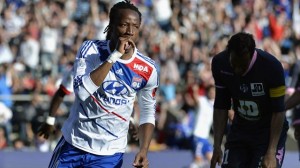 Rennes saw a difficult ending of the championship. A few days before its final in the League Cup, the Britons were not reassured in Ligue 1. A 4-2 defeat against Evian Thonon Gaillard. The Cameroonian Armel Kana-Biyik first scored against his side, allowing the Savoyards to take the advantage. The Ivorian, Yannick Sagbo scored the fourth goal of Evian. Ghana’s John Boye has reduced the mark to Rennes.

Seeking points for its maintenance, Nancy could not afford to lose to Ajaccio. The Cameroonian, Paul Alo’o Efoulou granted a precious point to Lorraine, snatching a 1-1 draw. The Algerian Mehdi Mostefa scored for the Corsicans.

Nice victory to Nice in its quest for a place in Europe. With the wand, the opening of the scoring of the Malian, Mahamane Traoré. 3-0 against Sochaux.

His 12th goal of the season count for butter. The Franco-Tunisian, Wissam Ben Yedder has equalized for Roma against Lyon but Bakary Kone of Burkina Faso, has given the advantage to the Gones before the successful goal of  Bafé Gomis.