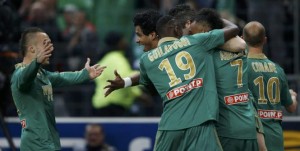 Saint-Etienne won the 19th final of the League Cup by one goal to nil against Rennes at the Stade de France!

The winning goal was scored by the Brazilian Brandao on a pass from the star striker of the club, helpless tonight P Aubameyang

All fans of the Greens were waiting for this victory especially as the club was released this week in the Coupe de France foolishly.

P Aubameyang wanted to leave the club with a trophy. He did it! Remains to know his future destination.

Meanwhile, he is having fun with all his friends …