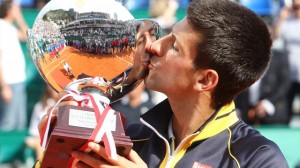 Without kicking racket, Roger Federer (8670 pts) regained the position of the World No. 2 in the ATP ranking.

The Swiss took advantage of the underperformance of the Scottish, Andy Murray at the Masters 1000 Monte Carlo to become the new dolphin of Novak Djokovic. The Serbian consolidates his position as the world No. 1 after ending the reign of Rafael Nadal on the Rock Sunday with a gain of 400 points (12900pts).

Beaten in the final, Nadal remains at the 5th place, but loses 400 points. With the exception of musical chairs between Federer and Murray, the other members of the Top 10 retain their position. And Jo-Wilfried Tsonga, a semi-finalist on the ocher land of Monaco is becomes the World N°8 with 3875 pts.

Out in the first round of the Monaco, Gael Monfils still occupies the 105th place.

Stopped in the second round of the Monte Carlo, the South African, Kevin Anderson, the World N°27 World lost a row.

However the second African among the 200 top ranked, Malek Jaziri gained 3 rows. He is actually the 165th.