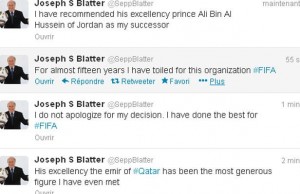 This is the big buzz of the day! The inescapable and ever-present Joseph Sepp Blatter, the powerful president of the World football had himself announced on his Twitter account his resignation! And also about his relationship with Qatar …

“His Excellency the Emir of Qatar is the most generous person I have ever met. I do not apologize for what I did. I made the best decision for FIFA. “

“I was forced to resign by a special meeting for having been corrupted by the Qatari royal family before the vote of the 2022 World Cup award.”

He finished without saying that the head of FIFA is not the author of these explosives words and that his account was hacked!