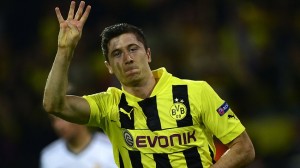 He was the hero of Borussia Dortmund by scoring four goals Wednesday night in the semi finals of the Champions League against Real Madrid.

Today it is rumored that the Polish striker Robert Lewandowski is transferred to Bayern Munich!

Dortmund reacted immediately via the Dortmund manager Michael Zorc: “It is really rubbish”

Bayern has also refuted it in a short statement.

It is true that a very few days from the very likely final Dortmund-Bayern, this rumor comes at a bad moment…

To be continued anyway… .