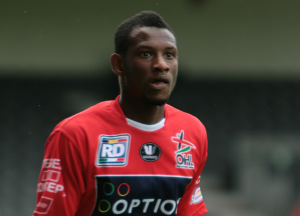 Gambia international striker Ibou Sawaneh returned to scoring ways in the Belgian Jupiler Pro League when his team, OH Leuven ran riot over one of his former teams, KV Mechelen in Group B of the UEFA Europa League Play-off.

Sawaneh, who has gone six games [close to two months] without scoring, was involved in all five goals for Leuven, scoring twice and setting up the other three as OH Leuven came from 1-0 behind at half-time to win 5-1 at the Argos Oil Stadion Achter de Kazerne in Mechelen.     Seth De Witte gave the hosts the lead in the 41st minute but Tomislav Mikulić levelled the scores in the 55th minute before Sawaneh scored a penalty to give Leuven the lead.

Robson Severino da Silva made it 3-1 six minutes later thanks to the Gambian’s assist.   Alessandro Cerigioni extended the advantage in the 70th minute before Sawaneh put the icing in the cake six minutes from time to complete the 5-1 riot of Mechelen.   Leuven have now joined Sporting Charleroi on six points in the four-team Group B table, one ahead of third-placed Waasland-Beveren in the battle for a UEFA Europa League berth.

The Gambia international striker, who joined Leuven from RAEC Mons last year by signing a three-year-contract with an option to extend from parent club KV Kortrijk, has now scored 19 goals in 32 appearances in his first season with the Leuven-based club.   The 26-year-old began his career with Polish Ekstraklasa [top-tier] side Lech Poznań in 2004, spending two seasons at the club before moving to K.S.K. Beveren in Belgium where he notched in 23 goals in 39 appearances during his two-year stint at the East Flanders-based club.

He later moved to West Flanders where he joined K.V. Kortrijk in 2008. During his time at the club, he was sent on-loan to KV Mechelen and RAEC Mons [who had an option to make the loan permanent].