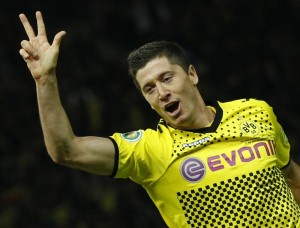 In the first leg last Wednesday, he had eclipsed all the big stars of Real Madrid. He is Robert Lewandowski. Little known to the public before the match, the Pole now earned a reputation of goals machine. On Tuesday, he will be very guarded.

And one, two, three, four … in one evening, Robert Lewandowski has set a new record in the Champions League. Be the first player to achieve a quadruplet in the semifinals of the C1 (review all the goals). To the point that he annoys his opponents. “Pepe asked me if I was not tired,” he revealed at the end of the match. In one evening, he exceeded Lionel Messi for the race at the best scorer of the competition this year, even returning to two goals from Cristiano Ronaldo (12).

If many do not know him, this is not because he didn’t chain the good performance. Since three seasons at Dortmund, the former scorer of Lech Poznan (bought for only 10 million Euros) displays crazy statistics. Only his first season with the Yellow and black has been (8 goals in 33 games). Since then it is more than 20 goals per season in the league (22 in 2011-2012) and already top scorer this year with 23 goals.

Moreover, the interests of the big clubs like Bayern Munich and Manchester United do not date only from last Wednesday.