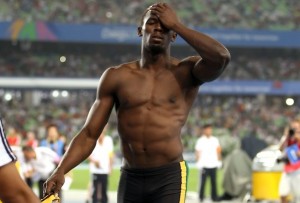 The six-time Olympic champion (100m, 200m and 4x100m) and record holder in the 100 and 200 meter Usain Bolt will not be in the starting block Saturday for the meeting in Kingston.

The Jamaican has a slight breakdown, announced Tuesday his coach. “I’m disappointed to miss the meeting in Kingston because I like to run in front of my audience in Jamaica,” said Bolt.

The Jamaican won the 100 m in this meeting last year and should be in line with the 200m on Saturday. Withdrawal for the Kingston meeting, Usain Bolt, however, should join the track in a short time. “They told me that it was just a tearing of level 1,” he says,” so luckily I’ll be OK soon.”

According to his manager, he hopes to be fit for the meeting of the Cayman Islands on May 8