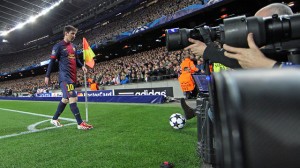 Nearly 1,000 journalists are announced on Wednesday at Camp Nou to watch the semi-final second leg match of the Champions League between FC Barcelona and Bayern Munich.

The press service of the Spanish club announced that it had granted accreditation to 990 journalists from around the world. A record for the Camp Nou. “This is the game with the most accredited media in the history of Barca at the Camp Nou before the Clasico in the Champions League against Real Madrid in 2011, with 965 journalists.”

Despite the score 4-0 in favor of the Germans in the first leg, this figure confirms the importance of this meeting. Spanish and Catalan press in particular believe in a turnaround. The Madrilenian rival, opposed Tuesday to Dortmund has not gone away. Real was eliminated despite a 2-0 win at Santiago Bernabeu (see the goals).