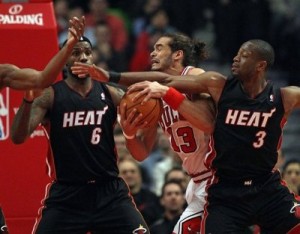 Huge in Game 7, which qualifies the Bulls in the semi-finals of the conference at the expense of the Nets, Joakim Noah said that this game will remain etched in hismemory (…) “I did not know if I could play before this series, I could barely walk. So to have played this game, to play like this in front of my family in Brooklyn … I’ll remember all my life. “

But the interior of Chicago will not have enough time to enjoy this qualification, as soon as Monday, he and his teammates will face the Miami Heat to their conference semifinal “I am very excited to the idea of facing the Heat, “he says. And because the Franco-Cameroonian is expecting a high level match against the NBA champion “They are clearly the best, but we all want to challenge the best. It’ll be … What I mean is that we are going to face the reigning champions, and it will be a war. “

The physical challenge is put as usual between the two franchises. We remember that Chicago had ended the unbeaten Miami in the regular season with a big Luol Deng to the stick. Absent during the last game of the series against Brooklyn, the British of Sudanese origin should be operational on Monday.