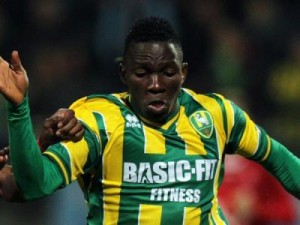 Kenneth Omeruo the Nigerian Super Eagles centre back is billed to join the English premier league side Chelsea for pre-season training ahead of next season. The defender has been on loan at Dutch club ADO Den Haag from Chelsea for more than a season. MTNFottball.com said that he has begun processing his travel documents to join Chelsea.

His representative stated that “Kenneth has begun processing his papers to allow him join Chelsea for pre-season in the summer. There will most likely be some changes at Chelsea and it would be after those changes that one would really know whether he will now stay at Chelsea or be loaned out again. He was very excited with his performance as a central defender. This was most probably his last home match for ADO.”

Omeruo could not join Chelsea last season for its pre-season training in the United States of America because his visa came in late. He has made 26 appearances and scored two goals since joining ADO Den Haag as a central defender in January 2012.

Omeruo was impressive in the just concluded African Cup of Nations (AFCON) 2013 when he played for Super Eagles of Nigeria. Super Eagles eventually won the tournament and he was selected as one of the tournament’s best defenders.

Omeruo’s Dutch club are ninth on the table with 40 points from 33 matches and play their final game of the campaign on Sunday at PEC Zwolle.