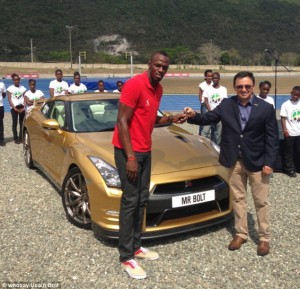 Six-time Olympic champion Usain Bolt has been given a personalised Nissan GT-R covered in gold.

The Jamaican had been a Nissan brand ambassador and has promoted the company’s Global Brand Campaign which began in April 2012.

Bolt’s season has had a slow start, a hamstring injury forcing him to pull out of Jamaica’s International Invitational event. He has confirmed that he will be racing in the Cayman Invitational at 100m. 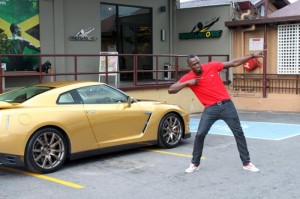 The model is based on the 2014 GT-R and features a customized design that was created by Bolt himself. Besides the eye catching exterior color, the Olympic gold medalist requested a white interior, a Bose audio system and 10-spoke RAYS forged aluminum wheels.

Nissan and Usain Bolt have previously teamed up to create a gold-colored GT-R for charity. It was auctioned on eBay where it raised $187,100 (€142,835) for the Usain Bolt Foundation which promotes educational and cultural opportunities for children and young people in Usain Bolt’s home country of Jamaica. 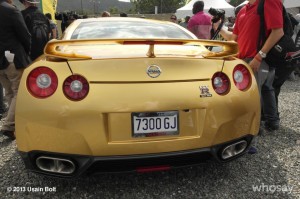