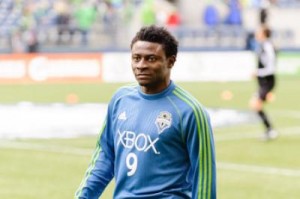 The Nigeria international missed Seattle Sounders 2-2 draw at Philadelphia Union last Saturday due to a niggling knee complain, and has been told to get fully fit before he resumes with the group in the coming weeks.

“A notable absentee for our game against Kansas is Obafemi Martins because he still feels some pains on his knee and we don’t want him in and out of the team every week,” Schmid states Sounders official website.

“He’s out of the game, so is Sharlie Joseph who is also injured,” he concludes.

Martins has scored one goal in three appearances since joining the club from Levante.