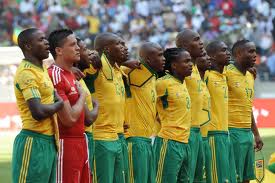 South Africa will play Central African Republic (CAR) in the 2014 World Cup qualifier at a neutral venue in the Cameroonian capital of Yaoundé on June 9.

The South Africa Football Association [SAFA] had asked FIFA and CAF for the move due to the ongoing political unrest in Central African Republic.

Thirteen South African soldiers died in skirmishes with the rebels in the capital Bangui two months ago. The number of casualties rose to 14 after one of the wounded soldiers died late last month.

SAFA have announced that the match will be played at the Stade Ahmadou Ahidjo stadium on Sunday, June 9 :

“I am happy that the venue issue has finally been settled,” South Africa coach Gordon Igesund says. “I must commend SAFA, FIFA and CAF for making this happen because we lost our loved ones there not so long ago and the environment is still too tense to have a match in that country. It would definitely not have been the right atmosphere to play there.”

Despite the match now being played on neutral territory Igesund is taking nothing for granted :

“But it would be silly of me to say that now that we are playing at a neutral venue, it will favour us. It will still be a very tough match, but the advantage is, it will be away from the intimidation of the home crowd. We will definitely be having our own supporters in the stands; which is a plus for us. We played well against them in the home leg but they showed they are a formidable side, so we need to be on guard and not take things lightly. We should get all three points here and keep the pressure on Ethiopia who are two points ahead of us in the group. We cannot afford to lose this match.”

South Africa will host Botswana in the last match of the 2014 FIFA World Cup group stages. The match will be played in September at a venue still to be determined.