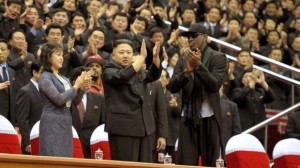 “I’m calling on the Supreme Leader of North Korea, or as I call him, ‘Kim,’ to do me a solid and cut Kenneth Bae loose.

The slang term “do me a solid” means “do me a favour”. It may be instead that Kim is puzzling over the meaning of “do me a solid”, which would even stretch some people who speak English.

Mr Bae, 44, who was born in South Korea but is an American citizen, has been sentenced to 15 years hard labour for what Pyongyang said are “hostile” crimes against the state.

In March, Rodman visited North Korea with the Harlem Globetrotters and spent time with Kim Jong-un, who is a basketball fan.

At the time, the leader told him that he had made “a friend for life.”

Rodman has styled himself as somewhat of a “diplomat” in recent months, even taking in a trip to the Vatican (some say as a publicity stunt) to reportedly to help Cardinal Peter Turkson of Ghana become the first black pope.