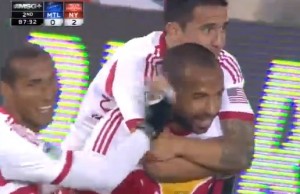 We have almost forgotten him but at 35, Thierry Henry is still playing and is still going strong!

The striker of the New York Red Bulls scored two goals last night against the Montreal Impact, including a fabulous back, one of the most beautiful of the season – see the best of Africa Top-Sports.com

This is the fifth goal in the season for the French striker in Major League Soccer.

Check out the goal!