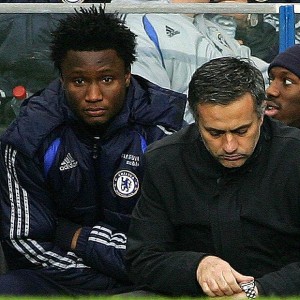 Super Eagles midfielder, John Mikel Obi has made it clear that he would love to see the return of his former boss Jose Mourinho at Chelsea, reports Completesportsnigeria.com.

Mourinho looks set to make a dramatic return as Stamford Bridge boss at the end of the season.

And midfield star Mikel said : “We are all talking about who is coming in.Jose is a very special person and makes decisions in a very special way. If he is the one coming back it will be a big plus for the club. We shouldn’t forget it’s not done yet and neither is the season. If it’s not Jose we will have to get on with the job.I think the future is exciting for Chelsea. Whoever the club choose to come in, we are professionals and will respect the club’s decision and we have to work with him.”

Mikel has had eight different managers at the Blues since he arrived in 2006.

The AFCON winner who returned to training with Chelsea on Thursday ahead of Saturday’s lunch time clash against Aston Villa,  admits Chelsea are “crazy” club, but one that the return of the Special One would help put right.

“Mourinho is a fantastic guy, a great guy and a fantastic human being, on and off the pitch,” states Mikel. He is someone who listens to his players, lifts them, knows how to put his arm around them.”

Mikel who injured his hip in training last week ahead of the second leg of Chelsea’s Europa League semi-final game against Swiss side,Basle adds that the former Porto and Inter Milan gaffer knows how to get the best out of his players.

“Everywhere he goes, players tend to work for Mourinho and fight for him. He knows how to motivate players, how to get the best out of you. From day one, he tells you what he wants from you and that’s exactly how it’s going to be. Yes, he is a very hard guy to work for. But a very hard guy in a very good way. He brings out the best in you. If you are a football player, that’s what you want. You don’t want to sit back and relax,” Mikel concludes.

Prior to the injury, Mikel had been left out of Chelsea’s last two games but he now has a chance of playing on Saturday if he regains full fitness.